How does a lake receive Oxygen?

Lakes receive oxygen from the atmosphere and through photosynthesis. Atmospheric oxygen is added from wind moving across the surface area of a lake. With more wind, more oxygen is added to the lake from the atmosphere. However, as sustained wind speeds < 2 mph oxygen addition from the atmosphere is next to zero. This is why oxygen concentrations vary so much over 24 hours and can be directly linked to wind speeds. Plants and algae can also add oxygen when exposed to sunlight in a process called photosynthesis. It is not uncommon to see dissolved oxygen levels reach > 15 mg/L during a major algae bloom. When sunlight is not present, plants and algae consume oxygen in a process called photorespiration. The high levels of oxygen observed when photosynthesis is at’s highest (typically late afternoon) also means very low oxygen levels can occur at night during photorespiration. Right before first light is typically when oxygen levels are at their lowest in a lake. This is because photorespiration has been occurring all night and wind speeds are often lowest during the night.

Why is Oxygen needed in Lakes?

Lakes are home to a diverse group of aquatic life: fish species, aquatic plants, and aquatic organisms. Fish and aquatic organisms need oxygen to breathe (respiration). Oxygen is required for the breakdown (decomposition) of dead organic materials (leaves, fish, algae, twigs). It is also vital to water quality because it reduces nutrients and prevents toxic chemical formations like unionized ammonia and hydrogen sulfide.

What does stratification mean?

Stratification is the thermal layering of water due to density differences. The warm less dense surface layer is called the epilimnion and the colder more dense bottom layer is called the hypolimnion. The thermocline refers to the depth at which the density gradient is largest. This is also where the temperature difference is greatest. Each layer is different from the other.

Can stratification occur in shallow lakes?

Stratification is not a function of depth. Stratification is a function of density change due to temperature differences. As long as a temperature difference exists (greater than 0.5 C will prevent oxygen diffusion) from the surface water to the bottom, the lake is stratified. This can occur in 1 foot of water and means oxygen can be lost in 1 foot of water. 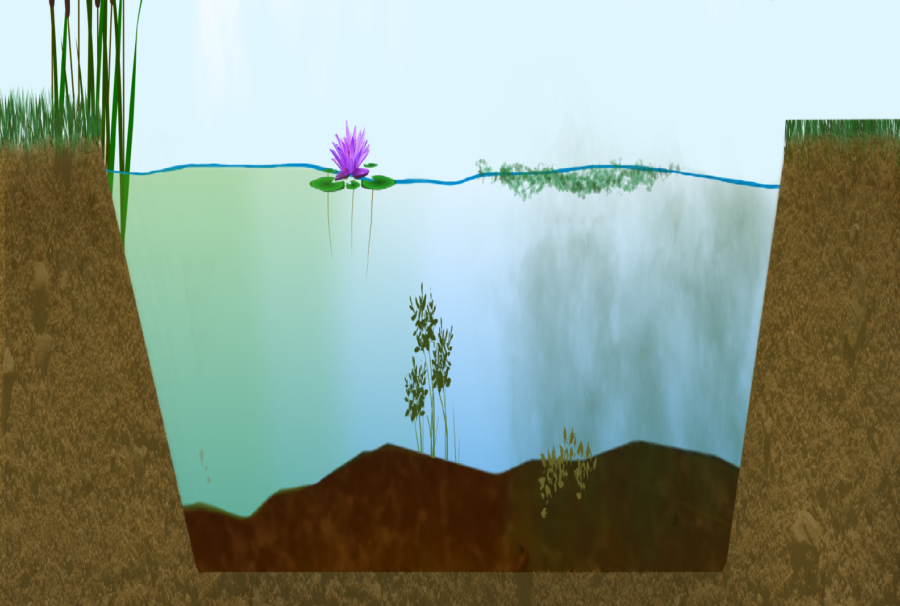 How can a lake become stratified?

Stratification is driven by temperature. Warm water has a lower density and will float on the surface above the cooler layer below not affected by the warmer temperatures. Cooler water sinks to the bottom because it is denser. This change in density (temperature) can be so strong that some lakes are stratified year-round also called amictic. Most lakes are polymictic stratify and mix multiple times throughout the year or dimicitic, mixing twice per year typically in the spring and fall. Lake mixing is when the surface water gets cooled enough to be as dense as the bottom water, the two layers will mix creating what’s called a “turnover”. The physical barrier disappears and the lake’s temperature and dissolved oxygen will be an average of the top and bottom layers. 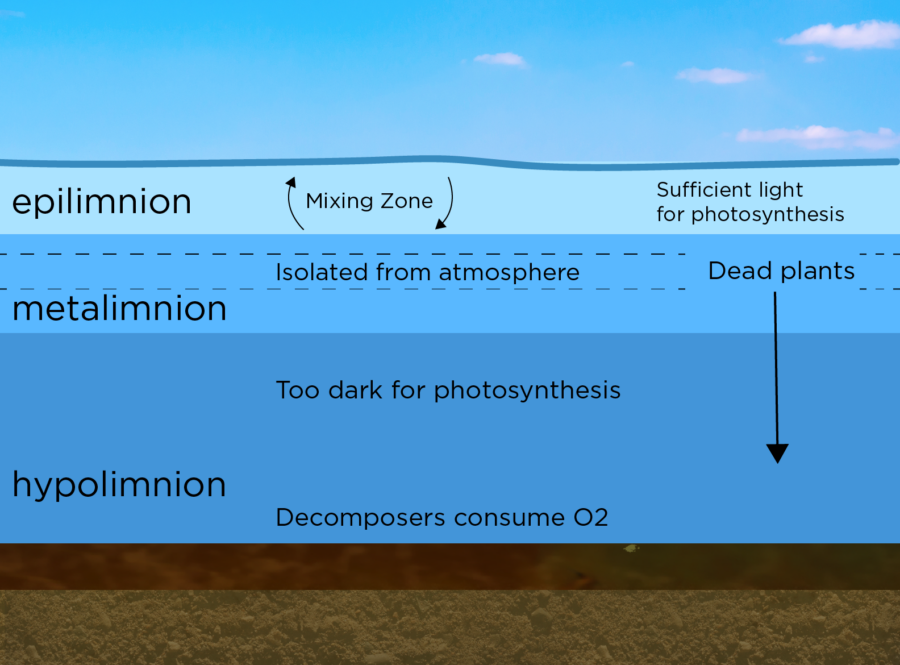 How does oxygen play a role in lake stratification?

When a lake stratifies, there are two distinct layers: a warm, less dense surface layer and a cold, denser bottom layer. The surface layer receives oxygen at the surface through wind diffusion. This allows the surface layer to be oxygen-rich and able to support aquatic life. Stratification physically prevents oxygen diffusion downward to the bottom waters and more importantly to the sediments. If there is more than a 0.5 C temperature difference from the surface water to the bottom oxygen will not reach the sediments. Sunlight can only penetrate to a certain depth. At the point where there is no sunlight penetration, oxygen cannot be replenished by photosynthesis from plants and algae or from atmospheric diffusion. Water at the bottom is denser than the surface layer of water so it is not able to be brought up to the surface. At the bottom, oxygen is used up by respiration and decomposition without being replenished. This can cause the bottom layer to become depleted of oxygen which can lead to anoxic (even hypoxia) conditions. 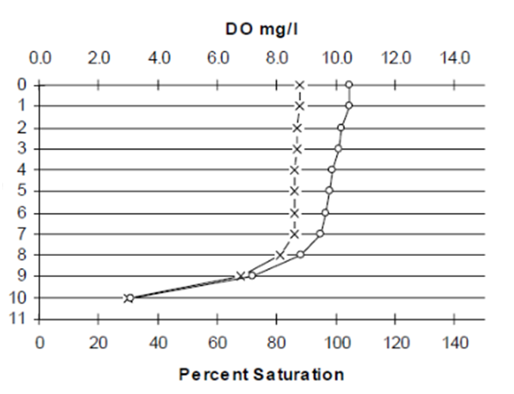 While the top layer above can support aquatic life, the bottom layer will soon run out of available oxygen. Anoxic conditions allow phosphorus and ammonia to become more soluble. These nutrients are released from the sediments in the water column. High amounts of phosphorus can increase algal and plant growth. High phosphorus levels can cause an overgrowth of aquatic plants. The issue with having too many aquatic plants is when those plants die they use up oxygen (decomposition). During the decaying process, oxygen is taken from the water. With too much plant decay, the amount of oxygen used may be more than what can be replenished.

High amounts of ammonia can be harmful to aquatic fish survival. Ammonia is introduced to a lake from added pollution, fertilizers, decaying plants/animals, and fecal matter. Too much ammonia can cause fish to have gill damage, lower reproduction and growth, and sometimes even death. Temperature and pH are important when assessing ammonia levels. The higher the pH and the warmer the temperature, the more toxic the ammonia. Also, ammonia is much more toxic to fish and aquatic life when water contains very little dissolved oxygen.

When a lake eventually turns over, the oxygen rich water at the top will mix with the oxygen poor water below and create a worse environment for aquatic life. The entire water column will now have an average amount of oxygen from the surface and bottom. This average of oxygen may be too low to support aquatic fish and organisms. This is where a fish kill may occur.