Where Does Muck Go?

This quite possibly could be the most common question we get here at Naturalake Biosciences.  Where does the muck go when MuckBiotics is used to break it down?  While our scientists could spend hours talking about the technical details and complexities of this question, most of the inquires seem to be looking for an answer that is relatively simple and easy to understand.  So, let’s get started with talking about muck.

Muck, sludge, detritus, sediment, and many other terms (although technically distinct) are commonly used to describe the combination of organic and inorganic matter found on the bottom of lakes, ponds, and other water resources. The organic portion is composed of a mixture of complex organic substrates from sources like dead algae, grass clippings, leaves, animal waste, and plants that make their way into the water body.  These larger complex organic substrates retain a disproportionately high amount of water within them.  The inorganic portion is composed of things like rock, gravel, sand, and clay that were either part of the foundation of the water body from the start or washed in over a period of time.

Both the organic and inorganic portion of muck can be problematic in lakes, ponds, and other water bodies. Muck buildup reduces water volumes or holding capacities, blocks drainage or inlet pipes, contributes to excess nutrient release and algal growth, and negatively impacts an assortment of recreational activities. While the inorganic portion can only be removed by physical means (heavy dredging equipment, hydro-raking, or similar), the organic portion can be removed or degraded within the water body using biological means. 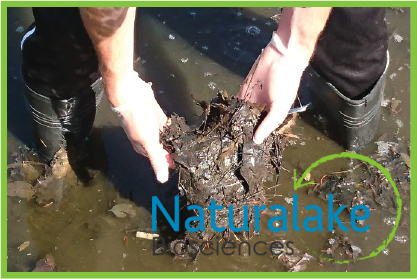 How It’s Broken Down

Ultimately, using MuckBiotics is an effective and efficient way to target organic matter on the bottom of lakes, ponds, and other water resources. It can be used proactively to prevent muck buildup or reactively to restore water volume and depth. 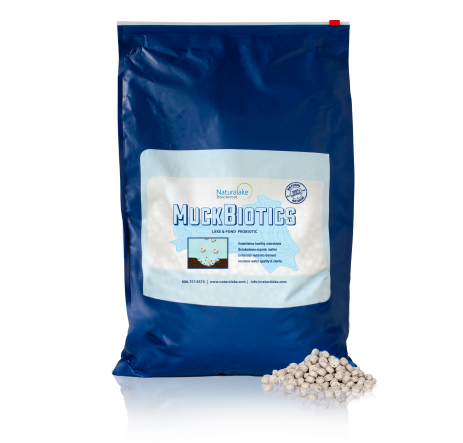 Naturalake Biosciences aims to develop pioneering biosciences to make safer water and better lives. Our team of scientists at our laboratory in the University of Wisconsin Research Park study microbial communities in aquatic ecosystems and their interactions with algae and aquatic plants. Their work ultimately leads to new innovations that augment existing technologies to make treatments easier and more effective.